On my Dell XPS 15 (9530), I have started experiencing Wi-Fi dropout issues.  It has taken me a month to finally get to the bottom of the issue and I wanted to blog about it to try and help any others experiencing the same issues.

Wifi “dropout” issues are notoriously difficult to troubleshoot.  This is primarily because of the huge number of people experience some nuanced issue that involves Wi-Fi.  I have found that googling for “Wi-Fi dropout” trying to find others experiencing the exact issue you
have, is largely pointless.

My issue was that the internet would suddenly drop out intermittently for a few seconds at a time.  The network would stay connected according to Windows, but packets would simply get dropped.  This is best illustrated by performing a continuous ping to my router. 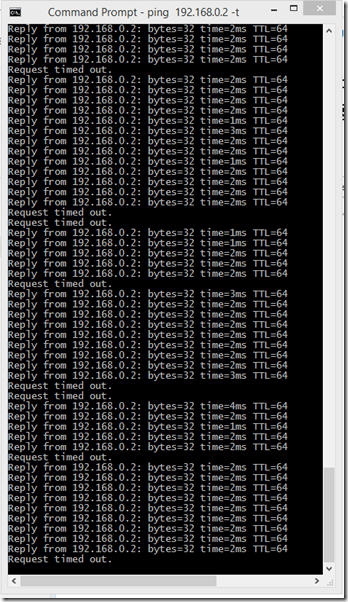 The nature of the dropouts make this quite a difficult issue to notice given most people’s usage patterns.  For example, if a user is just browsing the web, then a 1 second dropout every 15 seconds is not going to impact the user much at all.  At worst, they will have to wait a few
extra seconds for the page to load.  Browsers have become so resilient to network issues, that they tend to skip over them without missing a beat, resuming  where they left off when the network returns.

I noticed this issue because I make a lot of video calls to the office as I work remotely.  When the network would drop, the video and audio would freeze.  Lync (the video conferencing software I use) would do it’s best and recover effectively, but sadly it became very frustrating.

I am running Windows 8.1 Update 1 on my laptop.  I don’t know what caused the issues to start, but they seemed to arrive when installing 8.1 Update 1.

I contacted both Intel support and Dell support.  I contacted Intel because the Wi-Fi card is an Intel Dual Band Wireless-AC 7260. Intel support were very helpful indeed, attempting to solve the issue by troubleshooting.  Dell on the other hand just wanted to replace parts.
Dell replaced the following in a 2 week period:

Finally, Intel came up with the solution.

They asked me to try all the various drivers for the wifi card.

Intel support then asked me to disable U-APSD (only available in the 17.0 version of the driver).  This seems to be working.

You can disable this setting by doing the following:

It stands for Unscheduled Automatic Power Save Delivery. It is an optional part of the IEEE amendment 802.11e, QoS.  It is also known as WMM Power Save, and the behaviour and operation is exactly the same. It’s main purpose is to reduce the power consumption of the Wi-Fi card and increase battery life of your laptop.

I don’t know if the issue lies in Intel’s implementation or if the issue is more fundamental, but it took me 1.5 months to fix!

A brief look at Azure Files.  Here is the summary provided by Microsoft. Windows Azure Files allows VMs in…

What am I reading?

I have become a little obsessed with audible.com and want to keep a log of what I am…